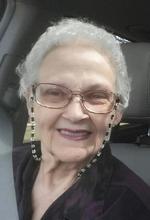 Durene Lawson, 79, passed away peacefully early Sunday morning, September 1, 2019, in Lubbock, TX, surrounded by her daughters and their spouses. Durene was born in Fort Sumner, NM, on 11/6/1939, to Charles Wesley and Leatha Green Guilliams. They eventually moved to Jal, NM, where she graduated from Jal High School in 1958 and later married Hollis Lawson on 9/4/1959. Durene and Hollis were married for 53 years. Durene worked for the Jal Public Schools for 45 ½ years in which most of that time she was the elementary school secretary. Durene served as the Mother Advisor for Jal Rainbow Assembly and followed her Rainbow girls throughout the state for many years. Durene was a Baptist and an Eastern Star. She also loved to needlepoint. After retiring in 2004, she and Hollis moved to Belen, NM, to be closer to their two daughters. She then moved to Lubbock, TX, in 2017.

Durene is preceded in death by her husband, Hollis Lawson; her mother and father, Charles Wesley and Leatha Guilliams; 2 brothers, Travis Gwen and Darrel Art; and one niece, Danielle.

All services will be Friday, September 6, 2019. A Visitation will begin at 9:00 a.m. followed by a service at 10:00 a.m. am at the Noblin Funeral Service, Belen Chapel, 418 W. Reinken Ave., a graveside service follow at Terrace Grove Cemetery.

In lieu of flowers, donations can be made to Calvary Baptist Church, Jal, NM; Caroline Aubrey Fund, Jal, NM; or the American Heart Association.

All rights reserved. This obituary is also archived at obittree.com