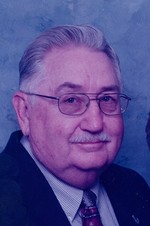 July 9, 1932 – July 1, 2019
On July 1, 2019, James Edward Larkin Jr. (Jim) went to be with the Lord. Jim was a resident of Belen (Rio Communities) for the past 27 years. Before this he resided in Los Alamos, New Mexico for about 18 years. Jim was born July 9, 1932 to James and Grace Larkin in Texhoma, Oklahoma. He was the youngest of four children with three older sisters. With the dust bowl hitting the Texas/Oklahoma area, his family moved to Appleton City, Missouri where he was raised on his parent’s ranch. Upon high school graduation, he joined the United States Air Force and proudly served his country for 21 years. While in the Air Force he met Ella Catherine Adams, the love of his life. They were married on February 26, 1955 and spent nearly 62 years of life together. During his career they had the opportunity to live in many places throughout the United States. When he retired from the Air Force in 1973, Jim worked as a radiation control technician supervisor for 15 years at the Meson Physics Facility at Los Alamos National Laboratory. After retirement from the Laboratory, they settled in Belen, but their travels continued as they enjoyed traveling the country in their RV to explore other parts of the country and to visit family and friends. Jim was an avid sports fan and taught his kids the value of hard work and the love of family. He enjoyed playing golf and many a day was spent on golf courses with family and friends. Later in life, he greatly enjoyed the camaraderie of bowling with his friends. He enjoyed rooting for his favorite teams, the Oklahoma Sooners, Kansas City Chiefs and St. Louis Cardinals. Jim was preceded in death by his wife, Ella Catherine Larkin; his parents; and sisters, Gayle Finnell, Neva Perry, and Jo McClain. He is survived by his sons, James Larkin of Layton, Utah and Scott Larkin and wife, Margaret of Los Alamos, New Mexico; Grandchildren, Olivia Campos (Mike), James Larkin (Laureana), and Ariana Larkin (Cameron); Great Grandchildren, Evelyn Roberts and Kai Campos. A funeral service will be held on July 5, 2019 at 12:30 PM at the Noblin Funeral Service Belen chapel. A reception will follow to celebrate the life of James Edward Larkin Jr. Burial will take place on July 12, 2019 at 9:45 AM at the Santa Fe National Cemetery. In lieu of flowers, the family requests that donations be made to the Disabled American Veterans Charitable Service Trust. Arrangements are being handled by the caring professionals at the Noblin Funeral Service Belen Chapel, 418 W. Reinken Ave., (505)864-4448.

All rights reserved. This obituary is also archived at obittree.com